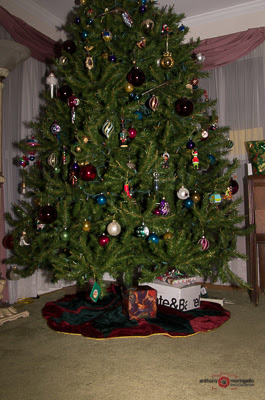 Have you ever tried to photograph your family in front of your beautifully decorated and lit up Christmas tree only to get a bland green tree with no apparent lights?


If you simply turn on your flash, you're likely to get  a nice green tree, but the lights do not show up.

The camera's flash is so much brighter than the lights on the tree that they simply do not have a chance in being seen. The tree also ends up being full of dark shadows and no life.

It just isn't worth wasting your family's time having them come out and pose just yet.


Here are a few tips for getting a more decent image. 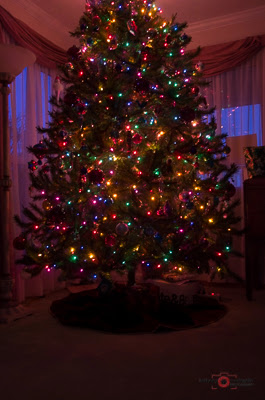 It is a simple enough task to set your camera on a tripod and use a long exposure to get a more beautiful result in your tree.  With several seconds exposure (about eight seconds here), you can get something like the following.

So again, we won't call them out just yet.


Wouldn't it be great if our camera could perform some magical mix of flash and long exposure?
Luckily it can.

One method is to use "Slow Shutter Sync" -- sometimes called "Fill Flash".
What this does, essentially, is tells the camera to expose for the background but send out enough flash to expose the subject in the foreground.

The key is to balance the flash with the background / ambient light.  This works well in some cases, but it can take some experimentation. 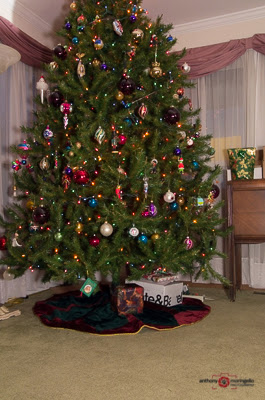 Since we know that exposing for the image without flash is going to take some eight seconds at ISO 100, we're going to have to bump up the ISO to something our subjects can tolerate.

Here I've set my camera to ISO 800 giving me an exposure time of one second.

With the Slow Shutter Sync, the flash goes off and the shutter remains open for one second, allowing the bulbs to illuminate through the bright camera flash.

We can see the lights now, but in my opinion, the flash is still causing the image to be far too bright. I really want more impact from the bulbs. 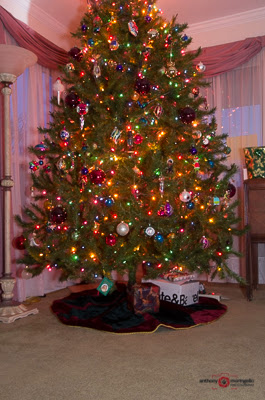 Finally I've cut the flash down to -2.0 stops. The will still be enough flash power to light up my subject yet I am retaining the beautiful Christmas tree and lights behind.

I am happy with look that ISO 800 giving me.  The exposure of one second is a little long for my subject to sit still but not unreasonable, so I'm going to go with it.

This ISO setting is also still plenty low enough that it is going to introduce very little noise with my camera.

I could certainly raise the ISO and reduce the shutter speed, but I risk introducing unacceptable amount of noise.

In the end, I've set my camera to ISO 800 with an exposure time of one second.
I've set the camera to use Slow Shutter Sync / Fill Flash mode, and I've cut the flash output to -2.0 stops.


The final result has a well lit tree and a beautiful subject at the same time. 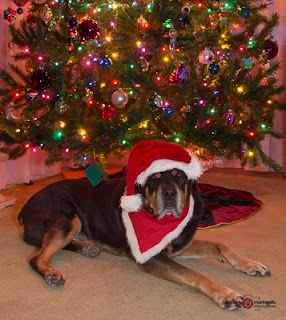 Have a safe, happy and well lit Christmas this year!

Posted by Anthony Moringello at 6:50 PM